“There's Something On Your Hat” 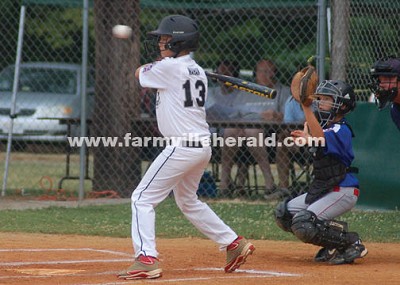 McKENNEY – As tight as things got for the Prince Edward Farmville Major League All-Stars in Tuesday night's 3-2 victory over Lunenburg, it was just the opposite in their Wednesday Championship Round contest against undefeated Dinwiddie American – a 7-2 loss.

It seems odd that a championship game would provide a situation where a team needing to win, in order to force another game it must win, to play loose. However, Prince Edward Farmville was already assured of being no worse than the second seed out of District V in the DYB State Major League Tournament.

In other words, the PEFYA All-Stars were playing with house money.

“We knew what they've done to the rest of the tournament field, with the exception of that 1-0 win over Dinwiddie National on Friday night,” said PEFYA manager John Adams of Dinwiddie American. “Since we were already in [the state tournament] we could relax, have fun and see what we could do, and we played well. This is definitely a confidence builder going into the state tournament.”

Playing as the visiting team, Prince Edward Farmville got off to a quick start in the top of the first inning, but could not scratch across more than a run after loading the bases.

Tanner Cyrus walked to lead off the game, and moved to second on a single by Clay Osborn. A second single by Christian Adams loaded the bases, and Austin Mahan pushed across PE Farmville's first run when he got hit by a pitch.

That was all Dinwiddie American needed to see before it made a pitching change that proved to be immediately effective.

Cody Brugros came on in relief for DA and immediately shut down the PEFYA rally. Henry Lutz smacked a liner that was caught by the DA shortstop about six inches off the ground. He caught the ball a foot or two off of second base, and easily tagged second for a double play. The next pitch, Drew Osborn lined a sharp grounder to the shortstop, who threw over to first to retire the side.

That became a common theme for PE Farmville on offense for the rest of the night. The PEFYA All-Stars only struck out twice (on the final out of the fourth inning and the first out of the fifth). Only three times did PEFYA fly out, which included a deep shot by Hunter Travis, who had what looked to be a lead-off double in the third inning taken away by a good defensive play in right field.

“We put the ball in play,” said Adams. “Some times we hit it right to them, but they also made some tremendous plays on defense. We did what you're supposed to do, but they didn't make any mistakes. They showed they're by far the most fundamentally sound team in the field. They don't take off plays, and just hustled the entire time.”

Dinwiddie American scored two runs in the bottom of the first, three in the second and single runs in the fourth and fifth against a PEFYA pitching staff that was unable to use Cyrus, who was unable to pitch due to DYB rules.

Matt Osborn pitched the first two innings, and Gabe Jenkins, who earned the victory on Tuesday night against Lunenburg, tossed the final three.

“They kept us close enough to give us a chance,” said Adams. “Again, that's all we could ask of them, and I feel that they've gained a ton of confidence as we go into the next round.”

Christian Adams accounted for PEFYA's only other run on the night with a towering solo home run over the center field fence with one out in the fourth inning. He finished the night going 3-3 with a run and the home run.

Prince Edward Farmville seemed to have all the momentum over Lunenburg when severe weather moved across the McKenney area on Monday night. Though the PEFYA All-Stars led only 1-0, things were setting up for the potential of a big inning in the bottom of the third when the bottom fell out of the sky.

When play resumed on Tuesday night, Lunenburg starter Kyron Stith, who issued four walks in the first two innings on Monday, regained his composure and was able to break the PE Farmville momentum with a 1-2-3 inning.

Lunenburg tied the contest with a two-out rally in the top of the fourth. Nate Nowlin singled on a two-strike offering from Cyrus, and later scored on a double by Ryan Spence.

Stith and Cyrus went toe-to-toe for the remainder of their available innings. Both teams threatened, but were unable to get the go-ahead run on the scoreboard.

With the two ace pitchers out of innings after the seventh, Jenkins came on in relief for PEFYA. With two out, Geffrey Goodwin reached on a fielder's choice and scored on Spence's second run-producing hit, before Jenkins struck out the side with runners on second and third.

Needing one run to tie and two to win, PE Farmville catcher Henry Lutz drew a one out walk, and was followed by Drew Osborn, who did the same. Jenkins was hit by a pitch to load the bases, and Aaron Weese walked in the tying run. Without putting the bat on the ball, PEFYA then scored the winning run when Drew Osborn raced across the plate.

“That was a true nailbiter,” said Adams. “Both teams put it all out there and played one of the best games I can remember. Tanner was tremendous. He kept them off balance with a mix of pitches, and Stith really brought the gas.

“Cyrus had his best stuff on Monday night, and Stith had his best stuff tonight, but once the game was tied, neither one gave an inch until they couldn't pitch any more. Jenkins did a great job for us in relief, and came up big with that strikeout in a pressure situation.”

Lunenburg scratched out seven hits on the night, while Prince Edward had only four, but was able to get ten runners on base through other means, including eight on walks.

Prince Edward Farmville will move on to the Dixie Youth Baseball Major League State Tournament to begin play on July 20. The PEFYA All-Stars will play Buckingham, the District IV runners-up at 2 p.m. in a game that was originally scheduled to be played at 8 p.m., but was moved after tournament host South Hill took an option to name the starting time of its first round game.

“Buckingham has a great pitcher that I'm sure we'll see,” said Adams, “so we will have our work cut out for us. They're going to have a chip on their shoulder, and I'm sure they'll be ready for us. We've got to be careful not to get ahead of ourselves.

“We have a number of kids that have come up just short of getting into the state tournament for a couple of years, so I'm happy for them, but I doubt either team is approaching the game as just being happy to be in the tournament. It will be a fight.”