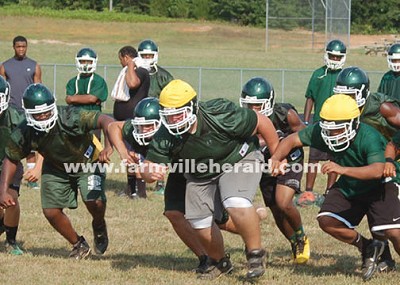 Practice Is No Game

Allen Iverson was correct when he said that practice was no game. Area high school teams took the field for the first official day of fall practice on Monday. Coaches voices were as strained as their players were physically after a tough day. Monday marked the beginning of a new era for the Cumberland High School football team, as well as first year head coach David Sullivan. Numbers are thin for the Dukes at the moment, as just under 40 were present for the first day. While he would've liked to have more, Sullivan said that he feels numbers will pick up as the first day of school nears, but for now, the coaching staff can be more efficient as it installs new defensive and offensive packages. The Dukes will return to a base 4-3 defense, and on offense, Cumberland will return to primarily running out of a spread package.

“It's such a tough district even to crack the top four,” said Sullivan, “but we have to start somewhere. I think that the new offense and defense will better play to our strengths.”

Like in most years, the Dukes will be small across the lines, but Sullivan hopes that some new blocking schemes that rely more on technique and quickness will negate some of their disadvantage when it comes to size.

Numbers are also a problem for Heather Sullivan's volleyball program, but that may be a case of having too many players and not enough jerseys to go around. Thirty-two girls attended the first day of practice in Cumberland's High School Gymnasium, and Sullivan says that there are a few that were unable to attend for various reasons. Most high school volleyball rosters carry somewhere between 12 and 15 players.

“This is always an exciting time of year,” said Sullivan. “I am happy with the interest our students have shown. This is a big group. They won't have the luxury of slacking off in practice, because nothing is a given. The effort they show in practice will be a major factor in any decisions we may have to make.”

Three consecutive seasons as a regional and state championship contender have students excited about the Buckingham County High School football team. BCHS head coach Craig Gill said that 87 kids between varsity and junior varsity have begun practice, with roughly 40 players on the varsity.

“We've had a really good summer. Really good,” said Gill. “Every day we opened the weight room, we'd have between 40 and 60 kids here. We will have some big shoes to fill, but who we have to fill them are very capable. We may not be able to throw the ball around as much as we have the last couple of years, but we're not going to be entirely one-dimensional, either.”