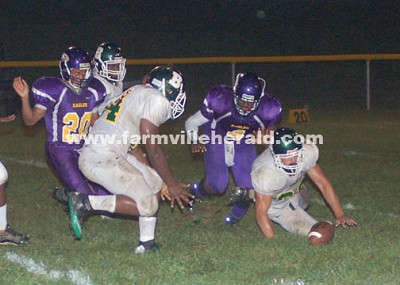 One of the biggest strengths over the years for the Buckingham County High School football team has been its ability to score first. Last Friday, the Knights did that about as quickly as a team could.

Standout tailback Kyree Koonce, who also returns kicks, set the tone with a 74-yard kickoff return for a touchdown in what would, up as a 57-0 victory over Prince Edward (1-2).

“I'm pleased with the way we executed,” said BCHS head coach Craig Gill. “We took advantage of some mistakes on their part. Their center was banged up and not able to play, and I know that affected them. Things like this happen to every team, and they're really better than the scores say. They're just snakebit right now.”

“Buckingham gets on you from the kickoff and stays on you until the game is in hand,” said PECHS second year head coach James Ford. “They're relentless. They don't give their opponents a chance to get back into the game. It's what you're supposed to do.”

Much as the score would indicate, Buckingham scored early and often. The Knights (2-0) gained only 343 yards and ran just 34 plays. Not much, given the final score, but it does point to the short fields BCHS had at its advantage.

“We really prepared well for Prince Edward in practice. Looking at the films, we were scared of [Davon] Adams and [Marquis] Fitzgerald. They're dangerous, but I was really pleased with the way our defense stepped up and shut them down.”

BCHS was led by Koonce who rushed six times for 110 yards and two touchdowns, in addition to the kickoff return to begin the game. His backfield-mate Kenneth Johnson rushed eight times for 100 yards and three touchdowns. He also had a 41-yard pass reception for a touchdown. Raekwon Gough had a 30-yard touchdown late in the game.

Senior quarterback Cam Johnson was 33 passing for 55 yards and a touchdown.

Defensively, Devin Smith had eight tackles, three tackles for a loss and a forced fumble. Austin Seay had seven tackles, while Kenneth Johnson had five tackles.

Prince Edward was held to just 63 yards on the evening. Adams was 1-9 passing. His only completion was to Fitzgerald for 20 yards. Jakeem Eddins led the Eagles on the ground with 21 yards on 10 carries, while Jevon Jackson had 19 yards on four touches.

AJ Watkins led the Eagles on defense with eight tackles, while Damien Mickey had seven tackles with a forced fumble and a fumble recovery.

“No. I don't think they'll be looking past us,” said Ford. “They were a young team last year, and return a talented quarterback and three tailbacks. They'll be ready for us, for sure, but our guys know what they can do. They've just got to do it.”

Buckingham will play its first home game of the season on Friday against Fluvanna in what looks to be the final Battle of the Bridge for the foreseeable future in a rivalry that will become a victim of reclassification and an increased focus put on power points.

“I suspect it will be a typical Buckingham/Fluvanna game,” said Gill. “They lost last week, but they're playing pretty well. I know they'll be ready to come in here well motivated and ready to play. We've got to continue to do what we've been doing.”