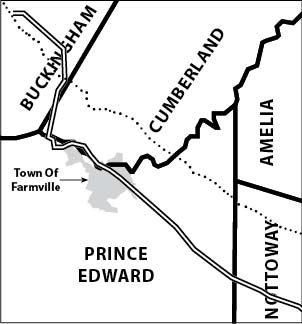 The rejected pipeline route, once considered by Dominion and ACP partners, is depicted by a double line, while the baseline proposed route is dotted. Dominion dismissed the alternate route, which would have seen the pipeline travel through Farmville.

Farmville Pipeline Route Rejected: But Was Considered By Dominion And Project Partners

RICHMOND — A route that would have seen a 42-inch natural gas pipeline buried through a portion of the Town of Farmville was considered but rejected by Dominion and its three partners proposing the Atlantic Coast Pipeline project.

“It was adjacent to a series of electric transmission rights-of-way over several counties,” noted Dominion spokesman Jim Norvelle, referencing the Farmville Major Route Alternative’s change of course in Buckingham, Cumberland, Prince Edward, and Nottoway counties. “And…a lot of people believe that we should be putting the pipeline adjacent to these rights-of-way as much as we possibly can…It’s got to make sense, and after we looked at this possible alternative we discovered that the proposed route still makes more sense to us.”

The proposed route has the pipeline traveling several miles north of Farmville, across Route 45 in Cumberland.

Dominion and its partners are seeking federal approval to construct a 550-mile natural gas pipeline that would span from West Virginia to North Carolina, travelling through Buckingham, Cumberland and Prince Edward counties.

The major route alternative considered was documented in one of the project’s most recent resource reports filed with the Federal Energy Regulatory Commission, or FERC.

“Atlantic identified and evaluated a major route alternative for the AP-1 mainline (the Farmville Major Route Alternative) adjacent to a series of existing electric transmission lines in Buckingham, Cumberland, Prince Edward, and Nottoway,” the document notes.

The dismissed Farmville route is longer than the proposed route, and crosses more wetlands and bodies of water, Norvelle offered. He explained that water “…is the most regulated activity of building a natural gas pipeline, so we are very aware…when we have to cross water, and that’s one of the things you try to avoid as much as you can.”

The considered route would have also crossed the High Bridge Trail State Park, Norvelle offered. According to a map in the report, the pipeline would have been much closer to the Sandy River Reservoir and the towns of Crewe and Burkeville.

The rejected Farmville Major Route Alternative initially headed east/southeast along a greenfield corridor for about 1.6 miles to a point east of the Willis River. It then followed an existing 138 kV electric transmission line to the southeast for approximately 2.2 miles to a point along Mill Road,” the report offers of the route no longer under consideration.

According to the document, the route then turned to the south and continued for approximately 7.6 miles adjacent to an existing 115 kV electric transmission line, crossing Stage Coach Road and passing west of the Town of Farmville’s golf course. From there, the route headed south for about 24.6 miles adjacent to existing DVP electric transmission lines (230 kV and 115 kV), crossing Farmville and Burkeville, and passing west of Crewe. It then headed northwest along a greenfield, terminating approximately at MP [mile post] 234.1 north of Woody Creek.

According to the report, the Farmville Major Route Alternative measured approximately 39 miles in length, of which about 35.6 miles was adjacent to existing electric transmission lines. The route crossed 79 water bodies, of which 19 are perennial, two miles of wetlands, and 17.4 miles of forested land.

According to the report, the route crossed about 0.1 mile of Commonwealth lands at High Bridge Trail State Park and the High Bridge Trail in two locations, but avoided Civil War battlefields. The route crossed developed land in both Farmville and Burkeville, including residential areas. Additionally, the route was directly adjacent to the Sandy River Reservoir dam and crossed about 0.2 mile of the reservoir, which has been identified by Prince Edward County as a future water supply water for Farmville.

The Farmville Major Route Alternative was 4.7 miles longer than the proposed route, the report cited, and crossed more wetlands and bodies of water than the baseline, including two additional crossings of the Appomattox River.

But, again, this once-considered alternative route was rejected by Dominion.