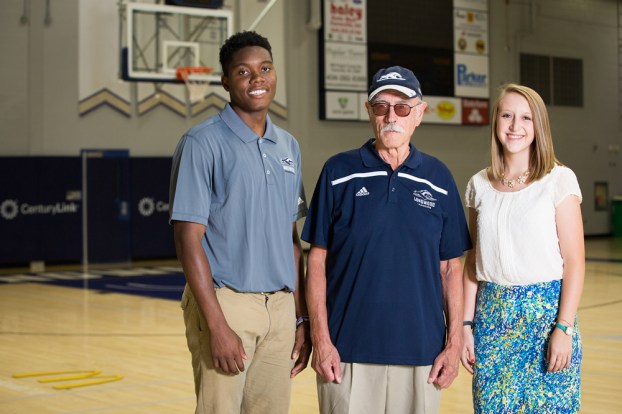 Gaskins donates over $1 million to Longwood

The donation is Longwood’s largest local gift from a Prince Edward County resident in the school’s 176-year history, according to a press release from Longwood.

“I was supported all the way through graduate school with scholarships, so I’m just returning the favor now,” Gaskins said. “I just want to thank [Longwood senior associate director of athletics for external affairs] Scott Bacon and [Longwood leadership gift officer] Chris Neal for all their help in this process. It was easier than I could have ever anticipated.”

Gaskins has very deep personal connections to the institution.

In 1924 Ms. Bessie Mae Land, his mother, enrolled at State Teachers College, the institution that would eventually become Longwood University. Land was an aspiring teacher, but shortly after arriving on campus, she was forced to abandon her dream.

Land was the oldest of her siblings and after the death of her mother in 1923, she became a cornerstone of her family. Soon after enrolling at Longwood, a family emergency in her hometown of Virginia Beach forced her to withdraw from school. She never returned, and her aspirations of becoming a teacher went unfulfilled.

Land went on to raise three children and manage the family business alongside her husband, John Gaskins, but her admiration for the profession of education manifested in her son, who earned his doctorate in statistics from Virginia Tech in 1972 and taught for 27 years at Hampden-Sydney College as a professor of mathematics and computer science.

Gaskins’ monumental gift will total $1,035,000 with $1,010,000 earmarked for the endowment of two full scholarships. The donation’s remaining $25,000 will be allotted for Longwood men’s basketball operational support.

“We are truly honored to receive Dr. Gaskins’ generous gift,” said Dr. Joan Neff, Longwood provost and vice president for academic affairs. “The fact that the majority of it will support student scholarships speaks to Dr. Gaskins’ passion as an educator and his devotion to providing students with the opportunity to obtain an excellent liberal arts education. In addition, the recipients of the scholarships will benefit from Longwood’s focus on preparing citizen leaders, both within the classroom and within the realm of athletic participation. The scholarship in honor of Dr. Gaskins’ mother also highlights Longwood’s significance as an institution that excels in educating future teachers.”

“This generous gift from Dr. Ray Gaskins is an extraordinary gesture of support for our students and for Longwood,” said Longwood President W. Taylor Reveley IV. “It will, in perpetuity, help worthy students complete their paths to a Longwood degree, and make a real difference in the trajectories of their lives. It is a fitting and powerful tribute.”

“The gift from Dr. Gaskins is monumental,” said Longwood director of athletics Troy Austin. “Ray has long been a supporter of Longwood University and Longwood athletics, but the step he has taken to endow two scholarships, including one for a student-athlete, is grand in both scope and generosity. Our mission in athletics is to expand the profile of the university, energize the Longwood community, and provide a quality experience for our student-athletes, and Ray’s support allows us to take all three of those objectives to another level. Longwood is blessed to have Dr. Gaskins as a teammate.”

The $530,000 Gaskins will donate to athletics is the largest gift in the history of the department, which is now in its ninth year at the Division I level. The donation is the latest in a decade’s worth of support from Gaskins, who has also contributed funding toward the purchase of the video board in Willett Hall along with new computers and scouting software for the men’s basketball program. Gaskins has also served on the Lancer Club Advisory Board and is a longtime men’s basketball season ticket holder.

“I guess I’ve been coming to basketball games over here for maybe almost 10 years,” said Gaskins, a former high school wrestler and still an avid jogger. “Once I decided to set up this scholarship for my mother, I decided I’d better do one for myself and split it even-steven.”

Two Longwood students will immediately benefit from the scholarship gift, both of whom share significant connections with Gaskins. The first recipient of the Mrs. Bessie M. Land Gaskins Teacher’s Scholarship is Emily Gay (’16), an elementary education major and native of Great Bridge, while the first recipient of the Dr. Ray A. Gaskins Scholarship is Kanayo Obi-Rapu (’18), a sophomore on the men’s basketball team, a kinesiology major and native of Greensboro, N.C.

Scholarship support for those two is available immediately, as Gaskins has allotted a portion of his gift specifically for financial aid this year.