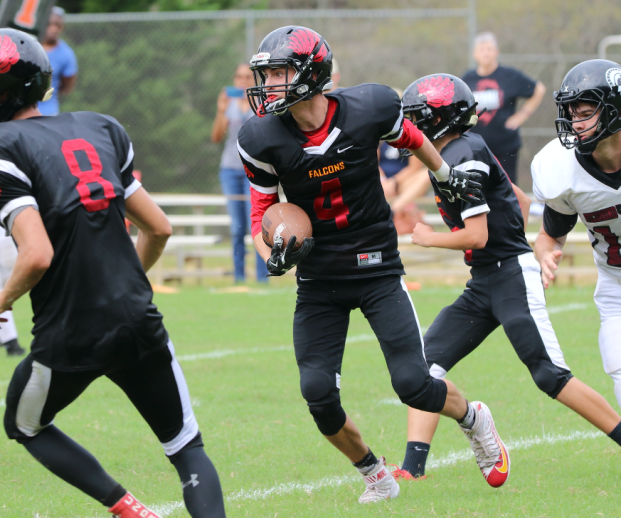 Fuqua School’s varsity football team earned its first victory of the 2018 season Saturday afternoon, and it was definitive. The Falcons led 43-0 at halftime against visiting Richmond Christian School and went on to win 49-14.

“The biggest thing we did is we eliminated our mistakes,” Fuqua Head Coach Ben Manis said. “If we hadn’t lost so many snaps against (Atlantic) Shores (Christian School on Tuesday), we probably would have been in that game. We’re fixing some of our mental mistakes. It’s just a learning process. We did fairly well …”

The Falcons were playing without injured sophomore quarterback Maureon Tisdale-Couch, but junior Drew Osborn stepped in and played well, passing for 90 yards and a touchdown and also running for 78 yards and a score.

Sophomore quarterback Luke Gee was effective too, running for 54 yards and a touchdown and passing for 38 yards and a score.

On defense, sophomore Jackson Allen had seven tackles, while Matt Osborn and senior Frankie Denaro each returned interceptions for touchdowns.

After playing both Tuesday and Saturday last week due to Hurricane Florence rearranging the schedule, Fuqua (1-3) will have a break with a bye this week. The boys return to action Friday, Oct. 5, at 7 p.m. at Roanoke Catholic School. This will be a rematch of last season’s Virginia Independent Schools Athletic Association Division III state championship game that the Celtics won 51-36.