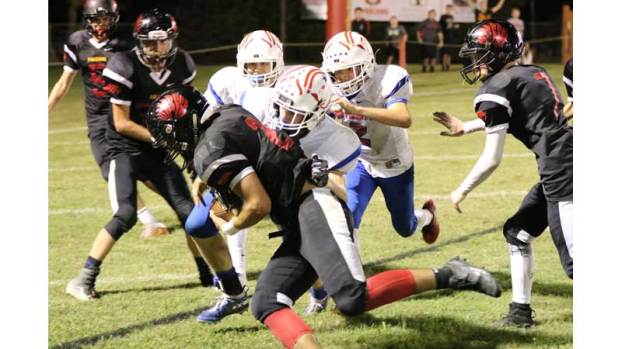 Fuqua School junior quarterback Elijah Warner makes a final drive to the black goal line visible in front of him with no time left on the clock Monday night as Portsmouth Christian School defenders desperately try to push him wide of the mark. Warner was able to get the ball across the line inside the pylon to tie the game 42-42. Falcons sophomore kicker Ryan McKay nailed the extra point to secure the victory and cue a jubilant celebration. (Photo by Titus Mohler)

‘All the way through’

Fuqua School’s varsity football team crafted an ending to Monday night’s home game against Portsmouth Christian School that some will remember for a lifetime.

The Falcons had led most of the game — at one point as much as 30-14 — but they knew the 1-3 Patriots were better than their record showed. Riding a clear wave of momentum, Portsmouth Christian used its increasingly potent passing game to take a 42-36 lead with eight minutes and one second left in the fourth quarter.

The Falcons turned the ball over on downs a little more than four minutes later, but then, on a dramatic 4th-and-9 play, Fuqua stopped a Patriots run just short of a first down to give itself one last shot with 1:28 to go.

A holding penalty pushed the Falcons back to their own 29-yard line, but they managed to drive deep into Patriots territory anyway. On a play that helped Fuqua reach Portsmouth Christian’s 20-yard line, the last seconds ran off the clock, but it was established the Falcons had gotten out of bounds with 1.0 second left.

No time was left on the clock, so the game came down to what Warner could do with this run.

Warner said, “… I ran, hit two people and dove in,” breaking the plane of the goal line just inside the sideline-marking pylon to make the score 42-42. “I just was laying on the ground, crying. It was such an emotional moment, man.”

Manis said that once Warner had reached the 3-yard line, he said, “‘Nobody can stop him there,’ just the drive in his legs — strong kid.”

The coach opted to go for the extra point kick rather than a two-point conversion, giving the cue to sophomore kicker Ryan McKay.

“I was nervous, but I had confidence in my holder and my snapper,” McKay said.

His kick sent the ball right down the middle, through the uprights, giving Fuqua a dramatic 43-42 win.

“It’s amazing how much these kids fight,” Manis said. “We’re a young team, we make mistakes, but they don’t care. They fight. They fight all the way through.”

Warner said that not since Dixie Youth Baseball when he was about 10 years old had he ever won a game on the final play, and it was a first for him in football.

McKay affirmed that he never imagined himself in a scenario like the one he had just experienced, but he shared what it mean to him to come through for his teammates in the way that he did: “It shows that kickers are useful.”

A variety of Falcons contributed to the team’s second win of the season. Sophomore Jackson Allen shined particularly bright, scoring touchdowns on a 15-yard run, a 19-yard reception and a 65-yard kickoff return, the latter of which gave his team a 36-34 lead after the Patriots had gone up 34-30 early in the fourth quarter.