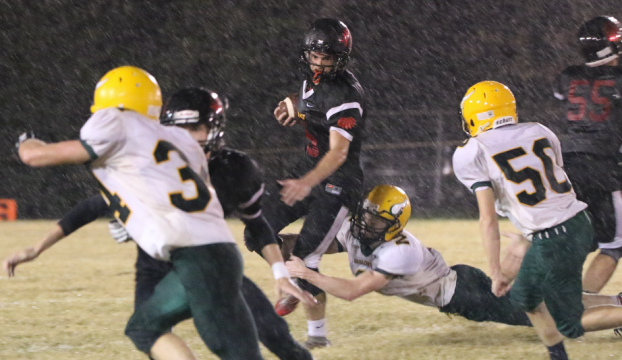 Fuqua School junior Drew Osborn looks to evade a diving Broadwater Academy defender while scanning for a path through the defense amid the rain Friday night. The host Falcons pulled away early for a 49-8 victory to conclude the regular season. (Photo by Titus Mohler)

The game marked the end of the regular season for the Falcons, who finished 4-5 after starting the year 1-4.

In the latest state ratings released by VISAA on Monday, the Falcons were ranked fourth with a 3.13 rating, ahead of Broadwater, which stood at No. 5 with a 2.00 rating.

“Now it goes to committee,” Fuqua Head Coach Ben Manis said, referring to the decision of what seed his team will ultimately hold in the state tournament. “It’ll be by points, it’ll be by coach’s poll and then it ends up going finally to the football committee. So, it’s a quality of a win thing and it’s also quality of opponents. They try to take all of that into account.”

Roanoke Catholic School was ranked No. 1 in this week’s state ratings with a 10.29 rating, followed by Blessed Sacrament Huguenot Catholic School at No. 2 with a 5.71 rating and Portsmouth Christian School at No. 3 with a 3.43 rating. Portsmouth Christian, which Fuqua beat Oct. 15, lost Friday night 31-20 to Atlantic Shores Christian School, making it likely that the Falcons will move up to No. 3 and visit Blessed Sacrament Huguenot next Friday in the state semifinals.

As for Friday’s win against the Vikings, Fuqua had to lean on some of its basics, having played only four days prior at Isle of Wight Academy.

“With that Monday game, it’s hard,” Manis said. “We didn’t have very much game-plan time. We had to prepare for a very good, tough opponent, so it is what it is. We ran some of our base stuff, which kind of works against most people, so that kind of is what’s great for us.”

The coach highlighted his team’s four seniors this year — Christian Adams, Frankie Denaro, Isaac Drummond and D.J. Williams. Some of them served in unusual roles Friday in order to give them opportunities on offense.

“All the seniors got a chance to touch the ball,” Manis said.

The reality that they will end their Falcon careers on another playoff run was special for them.

“It means a lot to me,” senior Frankie Denaro said of making the playoffs. “I really didn’t think we were, and I’m just so proud of my team right now.”