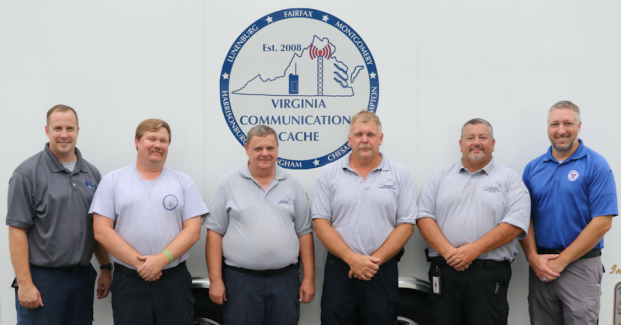 Virginia Communications Cache representatives gather for a photo during a two-day training session this past weekend in Farmville that assembled all five teams comprising the organization, each of which hails from its own locality. Pictured are, from left, Sean Fensterwald, from Fairfax; Chris Dennis, from Chesapeake/Hampton; John Powers, from Montgomery; Rodney Newton, from Lunenburg; Jim Junkins, from Harrisonburg/Rock- ingham; and Mike Keefe Thomas, the VCC’s coordinator at the Virginia Department of Emergency Management. (Photo by Titus Mohler)

Nearby Lunenburg County is home to one of the five teams that constitute the Virginia Communications Cache (VCC), and Lunenburg Program Manager Rodney Newton hosted organization-wide training for the cache this past weekend in Farmville.

Newton, who is also chief of Victoria Fire & Rescue, said the mission of the VCC is “to provide emergency communication assets to any locality that may need it.”

Each of the cache’s five teams hails from a different locality: Fairfax, Montgomery, Chesapeake/Hampton, Harrisonburg/Rockingham and Lunenburg.

“We’re all locally owned,” Newton said. For the Lunenburg VCC team, “every piece of our equipment is owned by Victoria Fire & Rescue through Lunenburg County. It’s all grant-funded. Each locality is the same, but we work as an asset of the (Virginia) Department of Emergency Management (VDEM).”

He noted that the cache is not designed to replace a communications system but rather to help in special or emergency situations.

“We’re designed to come in, in support of an event, a natural disaster,” he said. “We were in Appomattox after the tornado hit
(in 2016). We provided radio support for them for, well, actually (it) ended up being almost a month. We kept one of our repeaters up there.”

The VCC helped in Farmville during the 2016 Vice Presidential Debate.

“As far as the Lunenburg team, we were (in Prince Edward County on) Mother’s Day for the lady that was missing” this year, Newton said. “We were here help-

ing with that. We’ve been and helped with Longwood graduation. Probably six, seven, maybe even eight years ago, Longwood (Police Department) lost their radio system, so we came in and put up a temporary system until they could get back online.”

He spoke further to how the VCC’s services relate to localities in the area, starting with the and give a brief presentation on the VCC and what it was doing there that weekend.

Alluding to the inevitability of emergency situations, Puckett said, “I’m confident, regrettably, that we’re going to need them again in the future at some point.”

location he chose for the weekend’s training.

“If something comes up and (Prince Edward Assistant County Administrator) Sarah (Elam Puckett) needs me, we’ve got a mutual aid agreement with Prince Edward County,” he said. “She doesn’t even have to go through VDEM. She calls, says, ‘Hey, I need help.’ If I’ve got the resources to where we can, (we go). Last year, during Hurricane Michael, Charlotte County called. We wanted to go help, but our fire station was 18 inches underwater at the time, so we couldn’t leave to go help with that.”

Some of the cache’s teams bring different strengths and experiences to the organization based on the nature of their localities.

“The Fairfax team has done inaugurations,” Newton said. “Harrisonburg does a lot

of search and rescue because of the mountains and everything … Chesapeake does a lot of maritime stuff be- cause of their relations with the Coast Guard.”

He noted that some members of the Fairfax team are also part of the Federal Emergency Management Agency teams that offer international help, and some of those members are in the Bahamas providing aid in the wake of the destruction caused by Hurricane Dorian.

“They’re on our team as well, so we get that knowledge of what they’ve learned in different places as well,” he said. “Most of (our opportunities are) in state. We do have some opportunities that we may get requested to go out of state, but we’re primarily to support the commonwealth.”

“Each team trains locally monthly, but four times a year, we come together as the whole team and train together as the five teams together, and we just pick different places around the state,” he said Friday, Sept. 13. “It was my turn to host, so it was easier for me to coordinate something closer. I don’t have any hotel facilities in Victoria, so instead
of making them come to Victoria, do training, then turn around (and) have to drive 30, 40 minutes back to the hotel, it’s easier to do here.”

He said he also hosted a training session in South Hill.

The training this past weekend took place across Friday, Sept. 13, and Saturday.

“Today is skill stations,” Newton said Sept. 13. “Tomorrow is going to be a scenario-based type deal to where they’re given instructions to go out and, ‘Here, go do it.’”

He said most of the scenarios would unfold in the Town of Farmville.

“We’re going to be at a fire station (and) a couple other places in town,” he said.

On Sept. 13, the training was happening at different outdoor stations marked by separate tents in the parking lot adjacent to the South Street Conference Center along with an indoor station inside the center.

Newton noted that all of the training was communications-based and gestured to the different tents as he explained what was going on underneath and around them.

“The tent that they’re at over there is a satellite internet terminal that we can provide internet in remote locations if they can’t get anything in,” he said. “The tent over here, they’re talking about different types of antennas, troubleshoot- ing, so forth and so on. And this one over here actually is what we call a mobile tower unit. This is a fairly new piece of equipment for us, so they’re reviewing it with everybody as how to set it up. That thing will actually rotate 90 degrees and then go up about 70 feet to provide antennas at a higher elevation and everything. And then inside, we’ve got a group that’s going over our new telephone system that we’re able to use as well.”

Newton shared much of the information in this article with a small group of county and town officials that had gathered in the same parking lot Sept. 13 for a photo with Prince Edward Volunteer Rescue Squad’s new ambulance.

Puckett arranged for Newton to come over and give a brief presentation on the VCC and what it was doing there that weekend.

Alluding to the inevitability of emergency situations, Puckett said, “I’m confident, regrettably, that we’re going to need them again in the future at some point.”