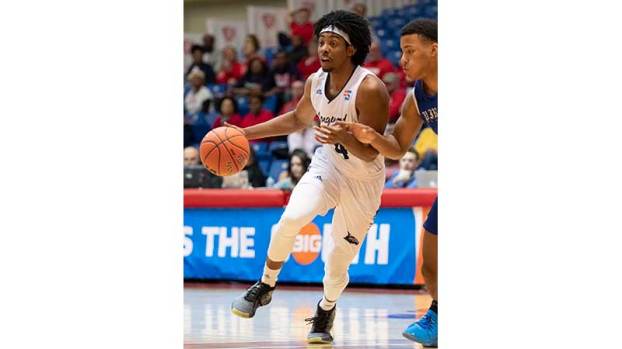 It wasn’t the final chapter they wanted, but the Longwood University men’s basketball team closed the book on a milestone-laden 2019-20 season Thursday night, March 5, in the Hercules Tires Big South Championship tournament.

No. 5-seeded Hampton University (14-18, 8-10 Big South) took advantage of an off-shooting night from the No. 4-seeded Lancers (14-18, 9-9 Big South) and used 32 points from All-Big South First-Team guard Jermaine Marrow to cruise to a 78-53 first-round upset in the quarterfinals of the Big South Championship.

The Lancers entered the game as a top-four seed in the tournament for the first time in program history on the strength of an 8-3 finish to their conference season and a 9-9 league record, but they saw that run come to an end after experiencing one of their poorest shooting performances of the season.

The off-shooting night opened the door for Hampton’s high-powered offense to pull away behind Marrow’s Big South-leading ninth 30-point game of the season, 17 points from Greg Heckstall and another 12 from All-Big South First-Team forward Ben Stanley.

He led the Lancers to the biggest turnaround in the Big South this season, rebounding from a 1-6 start to surge to the fourth-place finish.

“Obviously give Hampton a ton of credit,” he said. “They played really well. We struggled to make shots, and I thought they did a great job on us, defensively.”

The loss ends a milestone-laden 2019-20 season for the Lancers, who set new program records for Big South wins, winning percentage and regular-season finishes in their second year under Coach Aldrich. The defeat was only Longwood’s fourth since Jan. 25 and bookends a record-breaking run that saw the team end the season on an 8-4 surge, their best 12-game stretch against NCAA divisional peers since 2000-01.

“To a man, our guys continued to come in and really invest in the team and the program and in each other,” Aldrich said. “They did whatever they felt like they could do to help us be successful. I couldn’t be more proud of who they are as young men and the character and toughness it takes, when things aren’t going your way, to continue to do things the right way and continue to battle.”

Key to Longwood’s success during that surge was a staunch defense that entered the postseason ranked No. 2 in the Big South in fewest points allowed, but it was Hampton’s defense that controlled the game Thursday night.

Only senior guard Jaylon Wilson, with 17 points, and redshirt sophomore guard Juan Munoz, with 10, scored in double figures for the Lancers.

“We would have loved a fairytale ending, but that wasn’t in the plans, and that’s OK. I’m really proud of these guys,” Aldrich said. “There are a lot of people in this world, a lot of organizations, a lot of teams that wouldn’t have had the mettle and toughness to continue to battle the way these guys did.”

A prayer for the Town of Farmville