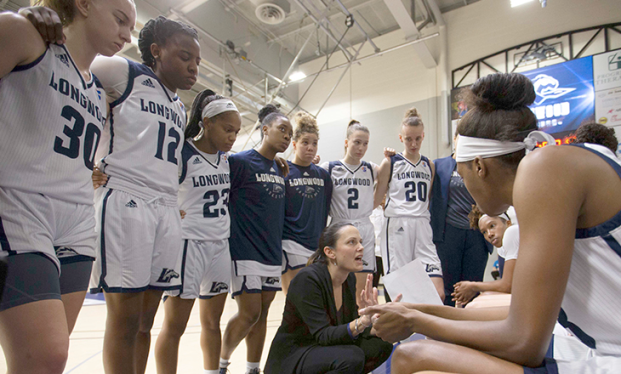 Build with us: The story of the 2019-20 women’s basketball Lancers

After the 2019-20 season, the Longwood women’s basketball record book looks a lot different.

Following a campaign that saw a breakout year two under head coach Rebecca Tillett, the 2019-20 Lancers made their mark not just on the court, but atop several of the program’s all-time leaderboards – no small feat, given that the program celebrated its 100th season this year.

But for all the accolades, awards and achievements, the path to Longwood’s breakthrough season started well before the season’s opening tipoff. It began in the locker room where the team set lofty goals – among them, to break records. It continued in the preseason through “Toughness” with the Marine Corps training, and it permeated throughout social media with the catchphrase-turned-hashtag, “Build With Us.”

That phrase became the rallying cry for a Longwood program that in just two seasons has made one of the most drastic turnarounds in the Big South. Tillett, who was hired as Longwood’s head coach in March of 2018, took over a program that had not reached double-digit wins in any of the five seasons prior.

Now at the end of her second season, the breakout Lancers — with Big South Freshman of the Year Kyla McMakin, fellow freshman standout Anne-Hamilton LeRoy, Big South blocks leader Akila Smith, and Big South assists leader Tra’Dayja Smith all set to return next year — are set to continue their climb into the tier of Big South contenders.

“The significance between year one and year two is two-fold, people and time,” Tillett said. “We brought in seven recruits who in combination with the returners each impacted our success. We also had the time that is necessary for a change process. Last year’s team took steps to build the foundation for this year’s team, and we expected this year’s team to do the same.”

The Lancers made those expectations prophetic, rewriting history and winning plenty of games along the way. The team increased its win total by nine games from a year ago, finishing with 12 for the program’s most since the 2012-13 team finished 14-19 en route to a Big South runner-up finish. The Lancers offense finished as one of the most lethal scoring units in the Big South Conference, headlined by the high-scoring McMakin and double-double machine Rouse. That newcomer-veteran duo was the cornerstone of an offense that was the only program in the conference to score 2,000 points.

McMakin became the first-ever Lancer to receive Big South Freshman of the Year honors, while also receiving All-Big South First-Team, and All-Freshman Team honors, while Rouse became a two-time All-Big South second-team honoree. And while those two were the headliners, there was an entire cast of Lancers contributing to the team’s success.

“A large reason for the success we had this season was our connection on and off the court,” said Rouse, who scored her 1,000th career point this season. “When you add the amount of talent we had as a group, then we became a really tough team to guard. This season we had a skilled team, and we were able to score from all three levels.”

Longwood entered the year picked to finish 10th in the league standings but immediately crushed those expectations by jumping out to a 4-1 start in Big South play, the program’s best since 2012-13. It was a wakeup call to the rest of the league and put on display a new-look Lancer squad re-tooled with the addition of Tillett’s first recruiting class, a seven-woman group headlined by McMakin, Smith and LeRoy.

McMakin and Smith, the junior transfer, made an immediate impact and broke two single-season records in the process. McMakin’s 565 points shattered Longwood’s previous freshman single-season record of 484 points and ranked as the third-most ever scored in a single-season at Longwood. Smith played a vital role in the Lancers’ offense at the point, finishing fourth in the nation in assists per game and atop Longwood’s single-season list with 188 total dimes.

“It means a lot to break the all-time assist record at Longwood.” Smith said. “Records are meant to be broken. I am just happy to be a part of the legacy we are building here at Longwood under coach Tillett.”

But the new Lancers were not the only ones breaking single-season records and writing their names in the record book for the Lancers. Sophomore Akila Smith developed into a shot-blocking force for Longwood, setting the single-season blocks record with 74 rejections while also out-dueling her teammate Rouse for the Big South lead in the category.

January 15, the Lancers’ fifth game of league play, is one of the moments that stood out to Tillett when the hard work Longwood had put in behind the scenes came to fruition. Hosting league powerhouse Radford, Longwood drew a record-breaking crowd of 1,812 fans packed in Willett Hall and nearly pulled off a stunning upset before Radford held on for a 62-61 win.

“I truly believe it is all the moments added together that allowed our program to make this level of improvement,” Tillett added. “The Radford game at home in front of a record crowd stands out to all of us. It illustrated to each of us how far we had come in just one year. Some of the things that stand out to our staff and our players as being impactful include “Toughness” with the Marines Corps, leadership training with the Staple Group, competitive team-building, speakers to help with career and advancement, and our visit to the National African American History and Culture Museum. Those moments mattered in shaping our team and building our program.”

That early success also helped Longwood endure a rough stretch midway through the year, which began after suffering an 82-77 defeat in overtime to Presbyterian College February 8. The Lancers went on to drop seven straight league games by an average of seven points per game, including a three-game stretch against then No. 3 seed Hampton, No. 2 Radford, and No. 1 Campbell.

But that stumbling block proved to be a test of Longwood’s mettle. The Lancers rallied to right the ship and won their last two league games of the regular season against USC Upstate March 4, and Charleston Southern March 7. The two victories matched a program-best for Longwood with eight Big South victories and secured the No. 8 seed in the Big South bracket, earning the Lancers their first-ever home Big South Tournament playoff game.

“It has been meaningful to be a part of the beginning of the new era of Longwood women’s basketball,” Rouse, who witnessed that growth while playing all four years of her collegiate career at Longwood, said. “I have been able to see all of the changes that are being made in the program first hand, and I am grateful to have experienced the leadership of our coaching staff.”

But Tillett notes that the heights her Lancers reached in 2019-20 are not the peak. Longwood will return 11 players and four of five starters for next season, doing so in a program culture that has been building for two years.

“Our program intends to make another big leap next season,” Tillett said. “It is evident in our losses that we were right there so many times. We are taking an in-depth look at our defense and how to improve on that side of the ball. Our team has already begun discussing big goals while knowing that our daily actions will create the most significant wave of change for this program. There is energy these women bring to what we are trying to accomplish, and our staff genuinely looks forward to every interaction with this group.”