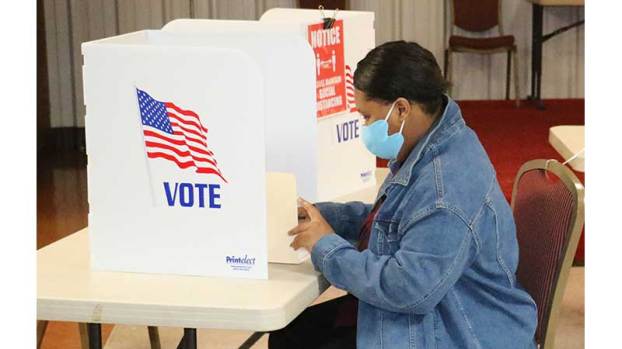 Mytisha Hayes, from Farmville’s Ward D, votes in the municipal election Tuesday, May 19, at the Prince Edward Elks Lodge #269. (Photo by Titus Mohler)

Dan Dwyer maintained a seat on the Farmville Town Council by overcoming the challenge of Carl Eggleston with 64% of the vote in the municipal election Tuesday, May 19.

Following a two-week postponement by Gov. Ralph Northam due to the COVID-19 pandemic, three council seats were up for election, but only the council’s at-large seat was contested.

Dwyer received 350 votes to Eggleston’s 189. There were four write-in votes.

“I am honored and humbled to have been reelected,” Dwyer said. “No one wins a political race on their own efforts alone. I owe today’s win to the citizens that either made an effort to complete the absentee ballot process or those who weathered a cold, wet day to have their vote count. In either case, the majority wanted me back for another term. I am very grateful for their support. Mr. Eggleston and I ran a race without negativity towards each other. This shows it can be done. I will continue to be responsive to all citizens in Farmville.”

Member Town Council Ward E Sallie Overton Amos is a newcomer to the council and was unopposed in the race.

Amos was elected to the seat held by Jamie Davis with 61 votes.

Davis did not seek re-election. During his eight years on council, Davis has been praised for helping to bring positive growth to the town.

“I am honored and excited to be elected to Farmville Town Council,” Amos said. “I am ready to get to work with my fellow council members and Mayor Whitus to tackle the impact the pandemic has had and continues to have on our local economy, our businesses, and community.”

Amos said that she had to rely on social media and word of mouth as a campaign tool for this election. “This has not been an ordinary campaign due to COVID-19, and I did not have the opportunity to meet with Ward E voters face to face like I wanted to.”

Amos’ election makes her the only woman currently on the town council.

Member Town Council Ward D Donald L. Hunter is an incumbent on the town council and was unopposed. Hunter received 103 votes. There was one write-in.