The captain of the Dukes 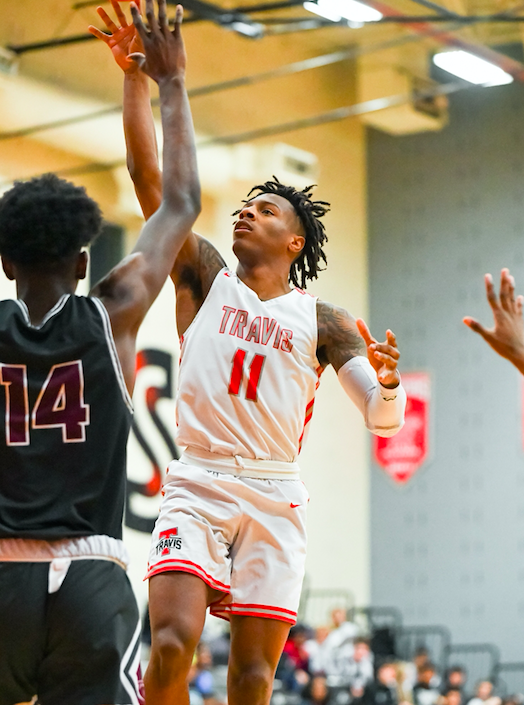 Longwood University Head Coach Griff Aldrich described Justin Hill, pictured above, as an outstanding young man and an athletic and physical scoring guard that not only fits the Lancers’ style of play but who will also help strengthen the team’s culture. Hill, whose parents were both NCAA Division I talents, recently signed to play for the Lancers.

Point guard Justin Hill has long followed in his parents’ footsteps on the hardwood, and after signing his National Letter of Intent April 22 to play for Longwood University, he’ll make his own mark in Willett Hall.

The son of Donna Holt Hill, who is an All-American at the University of Virginia and Atlantic Coast Conference (ACC) 50th Anniversary Team honoree, and Keith Hill, who is a former All-Big West first-team selection and record-setting point guard at New Mexico State University, Justin Hill will forge his own path at Longwood after signing with the Lancers.

A 6-foot-tall, 180-pound point guard out of Texas prep basketball powerhouse Fort Bend Travis High School in Houston, Hill is ranked as the No. 21 recruit in Texas by Texas Basketball Review, a top-10 prospect in the Houston area by recruiting services RCS Sports and OTR Exposure and one of five finalists for the Guy Lewis Award as selected by the Houston Chronicle. He is coming off a dominant senior season where he averaged 24 points, seven rebounds, four assists and three steals per game and powered the Tigers to a 31-7 record and the Texas District 20- 6A championship.

“We are extremely excited to have Justin Hill and his family join the Longwood basketball program,” said Lancers Head Coach Griff Aldrich, who has led Longwood to its two winningest seasons of its Big South Conference era since taking over the program in March 2018.

“Justin is an outstanding young man that not only fits our style of play but will also help strengthen our culture. He is an athletic and physical scoring guard, and he has proven himself at the highest levels of Texas high school and grassroots basketball. We are thrilled to welcome him to our program and are excited to help him continue to develop and grow.”

“I loved bonding with the coaches on the staff,” Hill said. “It feels like my relationships with them will be something that sticks with me forever. I feel like this will be a great experience, and I’m excited to begin my career as a Lancer.”

Hill has competed at a high level throughout his basketball career, most recently at perennial Texas 6A power Travis High School under Head Coach Craig Brownson and with the acclaimed Houston Defenders AAU program. Both are among the top programs in Texas and are headquartered in the area Aldrich called home before moving back to his home state to take over the Longwood program.

Hill’s success on the hardwood echoes that of his parents, both of which put together decorated collegiate careers at the Division I level.

His mother, Donna, had her jersey number retired at Virginia after a standout career in which she was twice named an All-American, honored as the 1988 ACC Player of the Year and a three-time All-ACC selection, broke the ACC’s all-time steals record and finished fourth on the league’s all-time assists leaderboard.

Now blazing his own trail at the Division I level, Hill will join a Lancer program that has enjoyed one of the biggest turnarounds in all of college basketball under Aldrich. The latest step in the Lancers’ climb saw them end the 2019- 20 season with eight wins in their final 12 games, including four straight to punctuate the regular season. That surge earned Longwood an outright fourth-place finish in the final Big South standings for the program’s highest-ever regular-season finish since joining the league in 2012-13.