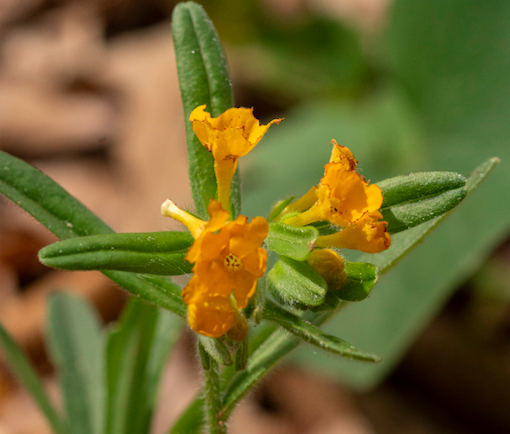 Even past its prime, hoary puccoon was still striking. (Photo by Cynthia Wood)

Sometimes a plant just shows up in an unexpected location.

Sometimes you walk by that location over and over, but not at exactly the right time. That’s what happened to me.

Two weeks ago, my hiking buddy sent me an email suggesting I should visit Holliday Lake State Park right away. He had been there looking for the dwarf ginseng that I had told him to look for on the Lakeshore Trail. He found it, logged a new county record, and then found two other plants that he knew would interest me.

One was hoary yellow puccoon (Lithospermum canescens), another county record. And so, I followed his rather convoluted directions to walk up several hills, down a ravine, and then to search in the tall grass. And there it was, a rather bedraggled looking plant with small, bright yellow flowers. Hoary puccoon is a native perennial found in the eastern United States. It grows 6 to 18 inches tall, and sends up one or more leafy, erect stems from the same root system. The stems and opposite oblong leaves are light green and covered with long white hairs, which give the plant the appearance of being hoary, hence the common name. The puccoon part of the common name is derived from the Algonquin word “poken,” which refers to plants that yield yellow or red dyes.

Native Americans used the pulverized roots of hoary puccoon for making dyes for both body and garment decoration.

A tea brewed from the leaves was used to treat fevers and convulsions. Following the Doctrine of Signatures, early settlers used the stone-shaped seeds of the hoary puccoon to treat kidney stones.

Hoary yellow puccoon is infrequent in the mountains and rare in the Piedmont and Coastal Plains. It’s generally found in areas that have basic substrates. I posted a photo of hoary yellow puccoon on my Facebook wildflower page and almost immediately someone commented that he had found this plant in another location nearby in Buckingham County. My hiking buddy checked out the information and, yes, it was, another county record.

I can’t take credit for finding this plant. In fact, I had very explicit instructions for locating it and was excited to see it. Now if I can just find the Clematis ochroleuca that my buddy said was blooming in the same area I would be so happy. I probably walked all over it when I was looking for the hoary puccoon. It’s supposed to be in the same area.

CYNTHIA WOOD is a master gardener who writes two columns for The Farmville Herald. She can be reached at cynthia.crewe23901@gmail.com.