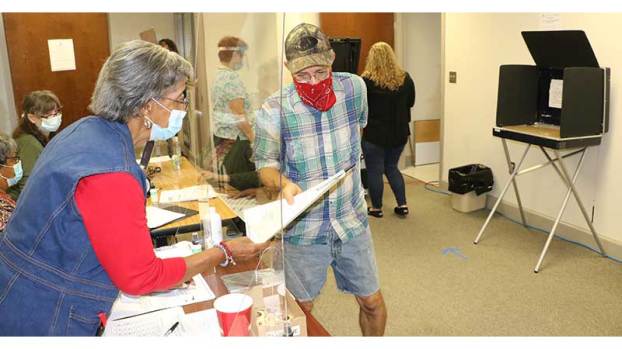 Harry Rousch accepts a ballot from Rebecca Randolph through a plastic divider during the first day of early voting Friday, Sept. 18, on the second floor of the Prince Edward County Courthouse. (Photo by Titus Mohler)

Early voting off to a strong start

Residents of Buckingham, Cumberland and Prince Edward counties did not waste time in taking advantage of the new in-person early voting opportunity available this year to all voters participating in the November general and special elections.

The Buckingham County Office of Voter Registration and Elections reported it had 91 early voters Friday, Sept. 18, which was the first day of early voting. The office had approximately 28 more early voters come in Monday, Sep. 21, as of around 12:30 p.m.

Cumberland County Registrar Marlene Watson said she was unable to access specific voting tallies Monday afternoon for Cumberland due to busyness with processing mail-out ballots, but said voting had been steady both Friday and Monday.

Prince Edward County Director of Elections Lynette Wright said 99 people voted Friday in Prince Edward, and as of 2:20 p.m. on Monday, that number had increased to 178, meaning 79 people had voted Monday, at that point.

“A lot of them are bringing their ballots back in that we mailed on Thursday and voiding them and voting on the machine — a lot,” Wright said. “And that’s a lot of work, because we’ve got to pull their applications and we’ve got to switch them over so we don’t get confused.”

But she said she was expecting this and was pleased the word is getting out about in-person early voting.

Wright said what is different about in-person early voting this year is that people can do so without having to state a reason. Previously, voters had to give a reason why they would not be able to vote on Election Day.

Many days of early voting remain, but Wright provided the data to calculate the percentage of Prince Edward voters that had already voted through one-and-a-half days of the period — 1.35%. As of Monday afternoon, Wright said the total number of registered voters in the county was 13,147, a number that may change since people can still register to vote until Tuesday, Oct. 13.

Prince Edward polling place workers said Friday started with a small line composed of eight to 10 people. With some lulls allowing poll workers breaks, the flow of voters was largely steady throughout the day.

Wright expressed excitement about the strong level of participation Friday and is hoping to see more of it throughout the early voting period.

“It’s going to be just like you’re going on Election Day,” she said, describing what early voting is like. “You just come in, show your ID, get checked in, get your ballot, vote (and) you are done.”