The National Weather Service has issued a Flash Flood Watch for Thursday night and Friday morning for the area immediately south of Farmville. The watch area comes just south of Prince Edward County, but does include our friends in Lunenburg and Charlotte counties. 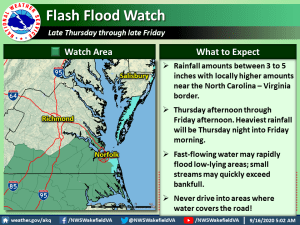 The weather service says to expect rainfall amounts between three and five inches near the Virginia-North Carolina border due to a tropical rainstorm associated with the remnants of Hurricane Sally. The hurricane strengthened to a Category 2 storm early Wednesday morning as it slowly churned off the Gulf Coast near the Alabama, Florida border. Currently moving at just 2 mph,  Sally is expected to plod ashore Wednesday morning between Gulfport, Mississippi and Pensacola, Florida.

The inland track appears to take the storm back out into the Atlantic before it moves northward enough to affect Prince Edward County. The forecast currently shows Farmville receiving 0.64 inches of rain Thursday night and then 0.2 inches of rain Friday morning from the tropical system. Areas in Lunenburg and Charlotte county are expected to receive up to an inch of rain.

Other than dealing with Sally, we are seeing perfect fall weather. If you haven’t been out yet this morning, it’s a bit chilly with temperature of 47 degrees in Farmville at 6:30 a.m. Highs today are expected to reach 77 with only a 1% chance of rain today. The high temperature Tuesday was only 68 degrees.