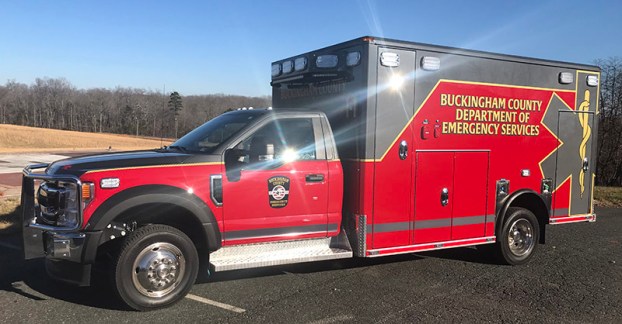 Approximately two-thirds of the squad’s staffing is DRT employees, Davis said, while the other third is direct county-paid employees.

Davis noted one of the biggest changes citizens will likely notice after this change in administration is the reopening and renovation of the Glenmore response station.

According to Davis, the county originally had two response stations in place, the main of which was and continues to be located in Dillwyn. The Glenmore station served as a satellite location of sorts, but the site was closed approximately five to six years ago due to the cost of operating and maintaining the building.

When the COVID-19 pandemic began in 2020, some volunteers at the squad stopped working due to safety concerns, and the county was anticipating an increase in calls due to the global health crisis.

The county was able to bring on an additional ambulance and crew via an emergency DRT contract, but there was nowhere to put them. So, with a bit of TLC, the station was cleaned up, brought online and reopened.

“Now we’ve got two locations in the county offering their EMS aid, so response times are shorter,” Davis said.

He added more updates are still to come. As the Glenmore station is rather small, ground will be broken likely sometime before February for a large renovation project that will nearly double the size of the response station and make it fit for 24-hour inhabitance.

Another positive change is an increase of resources on the road.

While the squad currently does not have any volunteers on staff, Davis said some applications for volunteer workers have come in. He hopes to welcome volunteerism at the squad again in the future.

Just this week the county accepted an EMS grant in the amount of $88,916 with a local match of $88,916 for the purpose of purchasing six new heart monitors/defibrillators to be placed inside emergency vehicles, giving a needed upgrade to some additional squad tech.

Davis said the squad currently has seven ambulances, two of which are kept on ready reserve status. The squad also has two quick response vehicles.

The ambulances, Davis added, have a fresh new look with new graphics and an updated paint scheme.

Davis said county citizens have in the past appreciated the opportunity to donate to the volunteer group. He said donating to the EMS system is still an option, although funds will now go to the Buckingham County Department of Emergency Services.

In closing, Davis commended the work of the volunteer squad in its help with the transition, adding that he was thankful citizens saw no interruption in service during the change in control.