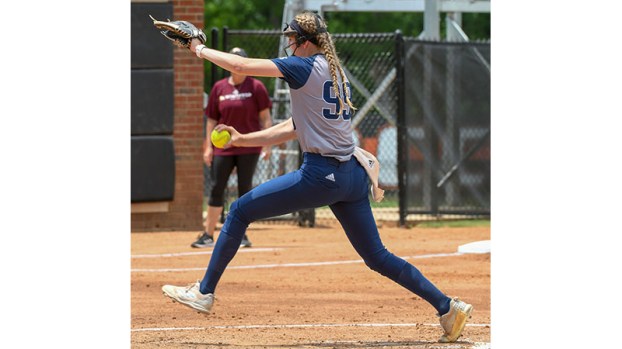 The Longwood University softball team opened its 2021 season with a 1-3 showing at the Georgia Classic this past weekend that was highlighted by a victory over the nationally ranked host team.

The Lancers fell narrowly in two games against Kent State University, 9-7 on Sunday, Feb. 21, and 2-1 on Saturday evening, Feb. 20.

Longwood opened its season Friday, Feb. 19, with a 10-2 loss to host No. 16 University of Georgia, but in their first game Saturday, the Lancers avenged the loss with a 3-2 win over the Bulldogs.

The takedown of No. 16 Georgia was one of the biggest upsets of the early portion of the 2021 NCAA softball season.

The win on day two of the Georgia Classic at Jack Turner Stadium was the Lancers’ first over a ranked team since a 6-4 upset of No. 15 University of California — Berkeley on May 4, 2018, and the 10th such top-25 victory in the Longwood program’s Division I era since 2005.

After knocking off the Bulldogs in game one of a doubleheader, the Lancers were six outs away from capping a sweep in Saturday’s nightcap against Kent State before a two-run, sixth-inning homer from Brenna Brownfield erased a 1-0 lead and lifted the Golden Flashes to a 2-1 victory.

Brownfield’s homer in game two was one of the few blemishes on a dominant day from Longwood’s pitching staff, which scattered nine hits and four runs across 13 innings of work. Senior ace Sydney Backstrom carried the lead by throwing 6.2 of those frames, securing the win over Georgia with a two-out save and throwing her 29th career complete game in Saturday’s nightcap.

Behind a combined three-hit performance from veteran pitchers Arleigh Wood, Angelina Sherba, Leigha Hill and Sydney Backstrom, Longwood shut down a No. 16 Georgia team that entered the day averaging 7.8 runs per game.

The senior Wood started the game and scattered one run in two innings, while Sherba, Hill and Backstrom teamed up to navigate the final five frames and secure the historic win.

“I’m so proud of each and every one of our young ladies,” Brown said, whose coaching resume also includes seasons at the University of Akron, Auburn University and the University of Connecticut. “There was not one person on our team that didn’t contribute to today’s game. We talk about competing together, and they truly showed the Longwood softball fight and grit.”

Hill, a two-way player who had not pitched in a Lancer uniform prior to Saturday, was nearly untouchable out of the bullpen, shutting out Georgia in the fourth, fifth and sixth inning to preserve Longwood’s slim lead. Georgia slugger Mackenzie Puckett finally got to her in the top of the seventh with a leadoff home run, but Hill bounced back to induce a groundout from Jayda Kearney.

Brown then called on her ace, Backstrom, who came out firing to strike out pinch hitter Jaiden Fields for the second out. Georgia leadoff batter Sydney Kuma followed with a single up the middle but got no farther than first base, and Backstrom got Savana Sikes to fly out to center fielder Lauren Taylor for the final out.

The collective performance of Longwood’s four pitchers was enough to make RBIs from Mason Basdikis, Leah Powell and Alexis Wayland stand. Basdikis and Wayland sent in their two runs during a go-ahead top of the third, with Basdikis driving in Taylor with a bunt single and Wayland following with a sacrifice lineout to left field.

Longwood (1-3) travels to Columbia, South Carolina, this weekend to participate in the Gamecock Invitational. The Lancers open their play Friday, Feb. 26, with a 1 p.m. game against Seton Hall University before facing host University of South Carolina at 6 p.m.