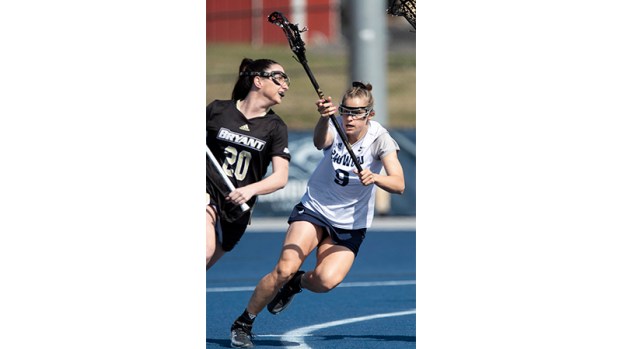 Dana Joss, No. 9, was honored with Big South Scholar-Athlete of the Year and All-Big South second-team midfielder awards.

Joss has also now been named to the All-Big South second team for the second time in her career, as she first earned the honor in 2019, the last year postseason awards were released. A do-it-all midfielder for Longwood on the field, the Louisville, Kentucky native finished 2021 in the top-two on her team in goals (19), assists (15), shots (64), ground balls (25), draw controls (53), and caused turnovers (15). She scored a season-high five goals against William & Mary in one of her two six-point performances, as she also tallied three goals and three assists at American. The graduate senior also reeled in a season-best eight draw controls against Old Dominion, and a season-best five ground balls against Radford. For her career, Joss will leave the program as the all-time record holder in draw controls with 224 and tied for fifth in Longwood’s annals with 70 career caused turnovers.

Joss has been every bit as prolific in the classroom as she has been on the field. After becoming the 13th Lancer in school history to be named a CoSIDA Academic All-American as well as receiving the Big South’s prestigious Christenberry Award for Academic Excellence in 2020 and graduating as the co-valedictorian of her class in May of 2020. She returned for her fifth year of eligibility in 2021 while pursuing a Masters of Business Administration at Longwood, which she will receive in May after maintaining her perfect 4.0 career grade point average.

“Dana has been an outstanding student-athlete for five years and has been a competitive and a reliable part of our offense, defense, and transition consistently throughout her Longwood career,” Jones added. ”It is very fitting that she leaves with such a high level of recognition for her efforts both in the classroom and on the field.”

Fellow senior and three-year captain of the Lancers Emma Johnson was named an All-Big South honorable mention for the first time in her standout career at Longwood. The Baltimore native led the Lancers in scoring with 30 goals and ranked second in points with 36. Johnson also led the team with 29 ground balls and 56 shots on goal, as she was an impact player on both sides of the field. She scored a season-high four goals on two separate occasions, first in Longwood’s season opener against VCU and again in the Lancers’ season finale against Campbell. She ended her season with six hat tricks, and 10 multi-goal performances including a full stat line of two goals, an assist, three ground balls, and a caused turnover in a conference win over Gardner-Webb.

“Emma, a three year captain, was a midfield warrior and a great role model for us all year long,” Jones said. “She worked tirelessly to elevate her play and the play of her teammates through her leadership, mental toughness, and her love and passion for being a student of the game.”

Lancer newcomer Lauren Cerretani was named an All-Big South honorable mention in her first season at Longwood. A transfer from George Washington, Cerretani made an immediate impact on defense for the Lancers. The defender led the team with 19 caused turnovers, and led the team with a 1.72 caused turnover to turnover ratio. The Great Falls, native also ranked second on the team in ground balls with 28, and added 10 draw controls. Cerretani’s best performance came at home against Gardner-Webb, where she caused three turnovers while committing none herself and added two ground balls and two draw controls in a tight 12-11 win.

“Lauren, our mid-year transfer, has been a really nice surprise,” Jones said. “It’s challenging to start on a new team halfway through the semester, but as the season progressed, Lauren’s defensive versatility, competitiveness, and hustle through the midfield provided many a much needed spark in multiple games.

“All three players truly embody our resilient Lancer spirit and I’m proud of them for achieving this recognition.”

With the 2021 season complete, Joss and Johnson will leave Longwood after illustrious careers in Farmville. In five seasons as a Lancer featuring 75 appearances and 65 starts, Joss racked up totals of 110 goals, 58 assists, 224 draw controls, 119 ground balls, and 70 caused turnovers. Johnson finished her four year career with 88 goals, 10 assists, and 67 ground balls across 53 games and 40 starts.